Here’s a look back at some of the best moments Halloween weekend had to offer.
Kyle B
|
11/2/2020
Tweet This 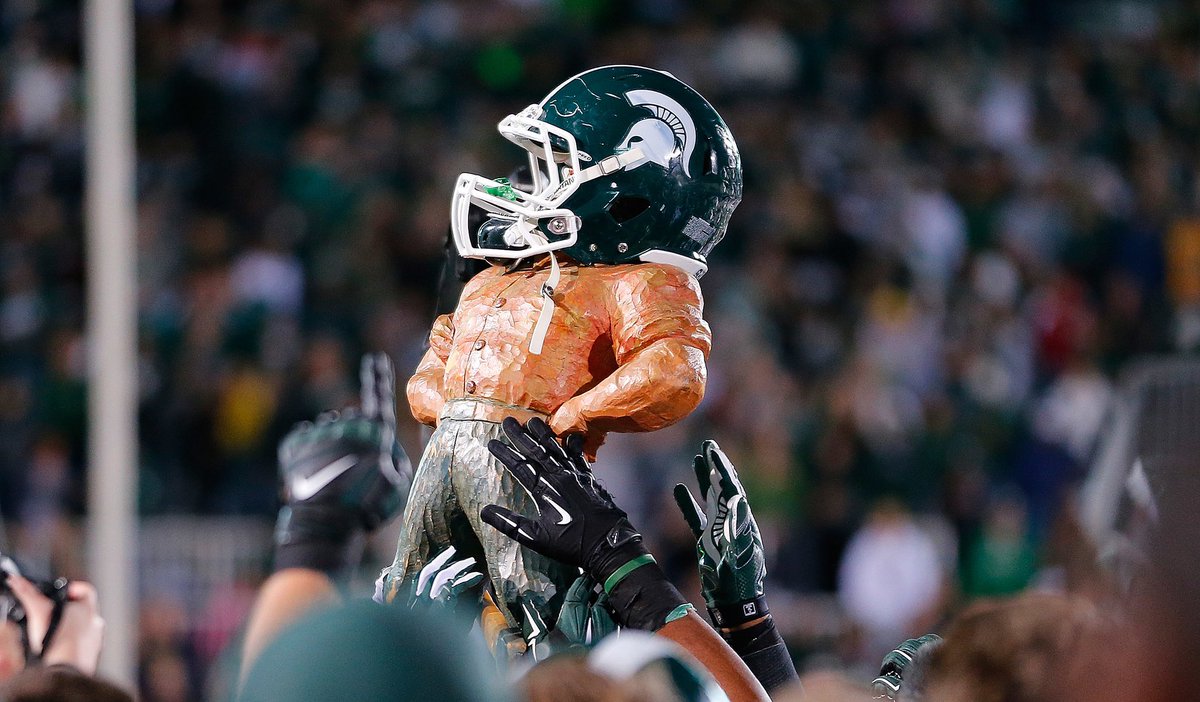 Despite the lack of compelling football on TV Sunday night — sorry, not sorry, Eagles and Cowboys fans — another weekend is in the books. Here’s a look back at some of the best moments Halloween weekend had to offer.

Last Sunday morning, headlines were declaring Jim Harbaugh and Michigan were finally back. Here to stay. The real deal. (Again)

This Sunday morning? Not so much. Michigan — 24.5-point favorites over rival Michigan State — laid a big egg at the Big House. Mel Tucker led his Spartans to a 27-24 win, just a week after a disastrous seven-turnover debacle against Rutgers. And just like that, Tucker outfoxed Harbaugh and the Wolverines, becoming the first Spartans coach to earn his first program win against Michigan. Needless to say, Tucker earned himself quite the photo-op with the Paul Bunyan Trophy after the game.

The Bears were leading the Saints in the third quarter Sunday afternoon when something apparently triggered Chicago WR Javon Mims. It’s still not entirely clear what led to the incident, but after a play came to a close, Mims ran over to Saints DB CJ Gardner-Johnson and punched him in the helmet twice.

Punching people in helmets is stupidpic.twitter.com/7zFS2HL0bD

‍Mims was penalized and ejected from the game, likely facing a fine and possibly a suspension. To make matters worse, Bears QB Nick Foles threw a pick-six to Marshawn Lattimore on the very next play.

Hardly anyone expected Saturday’s Indiana-Rutgers game to be in any sort of national spotlight. But after the Hoosiers dispatched of Penn State last weekend, a few more eyes were on that game than most expected. And those eyes caught quite the hectic play late in the game.

Facing 4th and 32 and still within a shout of the Hoosiers, Rutgers pulled off a miraculous lateral-riddled touchdown to keep hopes alive, complete with a lineman hurling the ball two-handed over his head. Or so it seemed. A review ultimately overturned the play and IU moved to 2-0, setting up a big meeting with Michigan next weekend.

Rutgers just scored the *wildest* touchdown of all time that should have counted on principle alone.

The Denver Broncos were pretty much dead in the water late in the second half Sunday against the Los Angeles Chargers. Trailing 24-3, the game seemed likely out of reach, but quarterback Drew Lock led the Broncos all the way back to within a score in the game’s final minutes.

Locked capped things off with a strike to rookie WR KJ Hamler as time expired, keeping his team within a shouting distance of the playoff chase.

In honor of Tuesday’s upcoming presidential election, let’s check in on former president Barack Obama. Video surfaced over the weekend of Obama dropping a silky smooth jump shot from distance, sending social media into a frenzy.

I miss the vitality. The swagger. pic.twitter.com/B2a9Re8b59