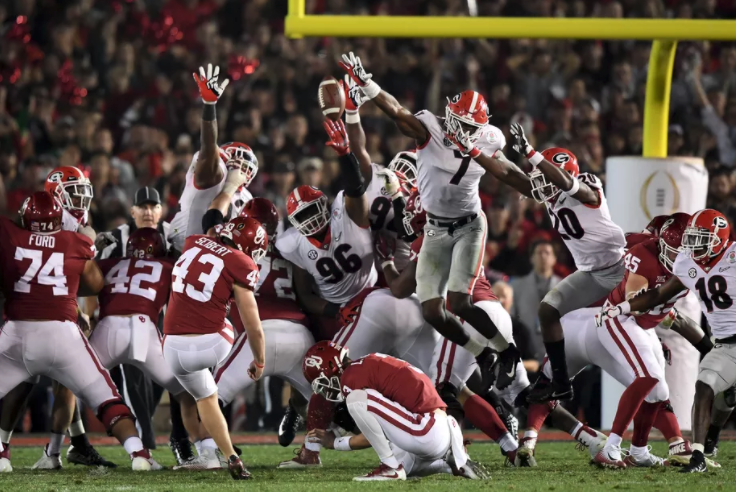 Less than a decade ago, college football fans were clamoring for change. Sick of the outdated BCS, fans were ready for a playoff system. It was time to stop snubbing the No. 3 and No. 4 teams. Now it seems we’re just “snubbing” the next handful of teams in line.

But whether you think the College Football Playoff has been the perfect solution or not, there’s no denying that six years into the new era, there have been some classic games in the CFP, even if you’re not a fan of the usual suspects or revenge games.

As we’re about to see what the seventh installment of the playoff has in store, it’s worth taking a look back at the five best games in the short history of the CFP.

I promise, I’m not going to bring up Michigan State’s 38-0 loss to Alabama, or Jameis Winston’s Rose Bowl blunder. I won’t mention Washington’s Peach Bowl woes or Notre Dame’s blowout against Clemson. While memorable for different reasons. I’m talking about the best of the best — ones we’ll remember for a long time.

It was the dawn of this new playoff age and everyone was expecting Alabama to cruise to a fourth title in six years. And through the first quarter and a half, it sure seemed like that was going to happen, with the Derrick Henry-led Tide leading 21-6 just before halftime. But then the Buckeyes came alive, scoring 28 unanswered points.

Though Alabama hung within a score for most of the fourth quarter, Ezekiel Elliott broke off an 85-yard touchdown run to send the Bucks to Arlingnton, where they would beat Oregon 42-40 for their first national title in a dozen years.

This would be the game that would mark the start of a new rivalry. We didn’t know it then, but this was the first of four straight CFP meetings between the Tide and Tigers — three of which would be for the title.

In a game littered with future NFL talent — Derrick Henry, Deshaun Watson, Calvin Ridley, Minkah Fitzpatrick and Wayne Gallman, just to name a few — we saw sparks fly early and often. Things got real interesting early in the fourth quarter when Alabama followed up a game-tying field goal with a surprise onside kick that led to a 51-yard, go-ahead TD catch for tight end O.J. Howard on the ensuing drive. A few short minutes later, Kenyan Drake would put the cherry on top with a 95-yard kick return for a touchdown, ultimately being enough to hold off a late charge from Watson and the Tigers.

If you’re a fan of the narrative like myself, it doesn’t get much better than this. Two storied rivals, both playing a de facto home game in Atlanta. The Crimson Tide just missed out on a trip to the SEC title game there a few weeks prior, but the Bulldogs took care of Auburn in that game, opening the playoff door for Saban & Co. once again.

The Dawgs had to skate by Oklahoma in a classic at the Rose Bowl — more on that in a minute — but once they got there, it sure looked like a national title would be headed back to Athens for the first time in nearly four decades. Enter true freshman Tua Tagovailoa. Who? This kid had only seen the field during garbage time here or there throughout the season before Saban turned to him at halftime with the Tide trailing 13-0. Stepping in for a struggling Jalen Hurts, Tua would hold his coming out party in the second half, throwing two touchdowns to Henry Ruggs and Calvin Ridley, the latter forcing overtime in the final five minutes.

After UGA took the lead with a field goal on the first possession of OT, the young freshman took an awful sack on first down, only to bounce back with a 41-yard strike to DeVonta Smith on the very next play, cementing his legacy as an Alabama legend and launching his storied collegiate career.

Speaking of the narrative, there’s not much better than good, old fashioned revenge in sports. A year after heartbreak in the desert, Watson and the Tigers arrived in Tampa with a chip on their shoulders, looking to return the favor.

It was another game dotted with future NFL stars and another game that didn’t disappoint. The Tigers and Tide traded jabs throughout, with Clemson finally taking a 28-24 lead with under 5:00 to play, only to have Hurts lead a 68-yard TD drive to regain the lead. Then Watson finally got his moment, leading a brilliant two-minute drill to set up the ultimate finish — a walk-off, two-yard dart to Hunter Renfrow, on a play that Bama fans still feel was an illegal pick. Nonetheless, Dabo Swinney had finally gotten it done, and would come back for more two years later and dismantle Alabama for a second title in three years.

Now it seems like Clemson and Alabama are on a collision course for a fifth CFP showdown in six years.

I mentioned earlier that Georgia had to win a wild one in Pasadena just to reach the national title game against Bama. And perhaps this game is what made that one in Atlanta even more intriguing.

The Bulldogs, playing in just their second Rose Bowl Game ever, were loaded with talent like Jake Fromm, Sony Michel, Nick Chubb, D’Andre Swift and Roquan Smith. On the other side of the field? Baker Mayfield, CeeDee Lamb, Hollywood Brown, and yes, even Kyler Murray played a snap or two. When you throw all that talent on the gridiron, you can only hope for a shootout.

And that’s exactly what we got. The Dawgs and Sooners combined for more than 1,000 total yards of offense and eclipsed the 100-point mark in what is undoubtedly in the running for greatest Rose Bowl of all time (Vince Young and Matt Leinart would have something to say about that). Both teams took turns lighting up the scoreboard in the fourth quarter before Michel ultimately scampered 27 yards in the Pasadena dusk to send the Dawgs home for the championship game.

So now that we’ve looked back on the brief, but thrilling history of the CFP, we now look ahead to this weekend in hopes of getting another classic battle or two.

Win some cash! Take a guess