This is a look at where your favorite — or least favorite — Lions, Packers, Bears and Vikings align with this iconic film.
Kyle B
|
12/21/2020
Tweet This 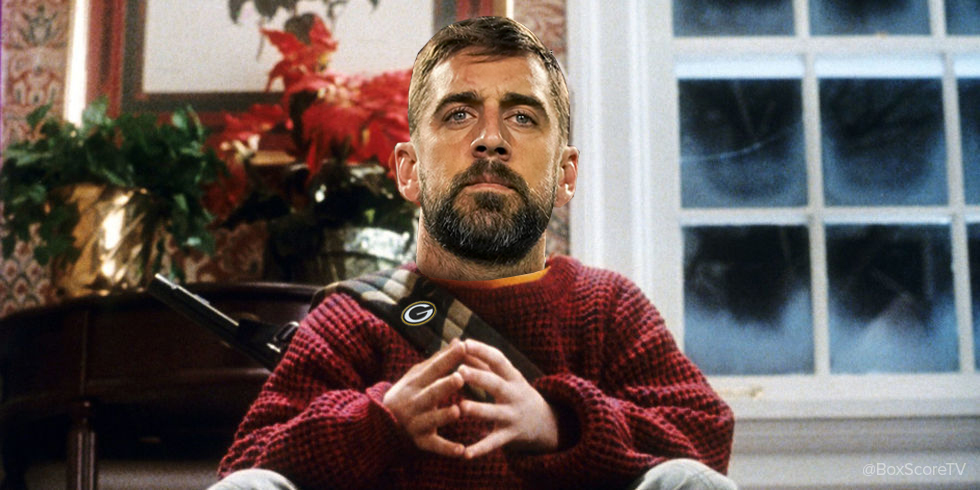 If you’re a ‘90s baby like myself, you’ve got some pretty rad childhood memories. And I’d venture to guess somewhere in that memory bank lies a fondness for the holiday season. And what ‘90s kid doesn’t love Home Alone?

It’s a timeless classic that will forever live among not only the best holiday movies, but with the greatest films ever, period. While many things are different about the 2020 Christmas season, all the nostalgia remains exactly the same in Home Alone. Trust me, I’ve watched it no fewer than three times in the last week as I embarked on a fun little project:
‍
Recasting Home Alone using the NFC North. From cute little Macaulay Caulkin and the memorable burglar tandem of Daniel Stern and Joe Pesci, all the way down to some of the more obscure characters you may have forgotten about, but still hit you with that blast of pure ‘90s Christmas joy. This is a look at where your favorite — or least favorite — Lions, Packers, Bears and Vikings align with this iconic film.

Let’s get right down to business. Young Kevin McCallister is the hero of our story, and over the last decade and a half, Aaron Rodgers has been the hero of the division. The main attraction. He’s been the only Packer, Bear, Viking or Lion QB to win a Super Bowl since divisions realigned in 2002 — and only one of two QBs to reach the Super Bowl (shouts to Rex Grossman).

Much like Kevin, he’s always got a game plan when he goes into battle and things usually seem to go according to planned. I can’t speak with 100% certainty, but I’m pretty sure Rodgers has never set up a funhouse of horror to fend off robbers, but he has sliced and diced his way through NFL defenses throughout his Hall-of-Fame career.

First off, let me be fair to Mitch and Nick. They’re not that incompetent. They may be struggling to find their footing in Chicago, but I can say comfortably they’d never try to rob a house on Christmas Eve and wind up getting scammed by a kindergartener. And they’d never get set on fire by a blow torch, smashed by an iron, step on a nail with their bare feet, shot in the junk, plastered with feathers and flung into a brick wall and keep going back for more. But some days, it sure feels that way as they bumble around trying to bring Da Bears back to relevance.

Whatever happens to this QB duo, Aaron Rodgers will be there in the window to wave and smile at them on their way out.

I’ll admit, it was tough not to assign Kirk Cousins to the Wet Bandits, solely because of the van they ride around in. But the Bears’ QB duo was too tempting to pass on for that role. So I’ll go with the seemingly innocent, charming delivery boy who can’t stop hitting the McCallister’s lawn decorations. Plus, he just wants to get paid for the work he’s doing, kinda like Captain Kirk.‍

Buzz is the oldest of the McCallister children, some might say the veteran presence of the household, even if he’s got an unorthodox way of doing things. You might say the same for Stafford to the Lions. Buzz is the one showing his siblings the ropes, and not afraid to use a little tough love. “The little trout could use a few days in the real world.” Stafford has been through a lot under center for the Honolulu Blue and Silver, so he’s allowed to impart his wisdom when he wants.

The eldest McCallister isn’t out here slinging side-armed dimes or taking brutal injuries seemingly every year due to a less-than-stellar offensive line, but Buzz knows how to run the show, even if it ends up with his shelves crashing down around him.

Peter McCallister — The naive half of the Lions fan base

These are the Lions fans who still have hope. The ones who truly believe someday the Lions will break through. There will be a Super Bowl parade rolling down Woodward Avenue and it will be a sight to behold.

Peter, the patriarch of the McCallister family, always seems to be pragmatic, yet positive. When they’re running late to get to the airport, he urges his brother to “think positive,” and he truly believes they’ll pull through in the end. When you consider Chicago traffic and airport security would’ve prevented them from getting to O’Hare on time, you realize his good spirits would’ve been for naught in the end, just like Lions fans who try to map out a path to the playoffs, knowing full well they’ve already dug their own grave with a 5-7 record.

Uncle Frank — The other half of the Lions fan base

These are the SOL fans. That’s “same old Lions,” for those not familiar with the term. Those who never see the Lions going anywhere. They have the “you be positive, I’ll be realistic” approach to things like Uncle Frank. They see a team that hasn’t won a title since 1957, and just one playoff game since then. And when things are going wrong, they’ll stand up and yell, “look what you did, you little jerk!”

But Uncle Frank, much like these Lions fans, is quick to be there when things are good. He snags the stack of pizzas and scurries off to enjoy it without paying. And when they do make their flight, he’s clamoring for champagne and telling his wife to steal the crystal glasses. He wants to make sure he gets his money’s worth while he can. All those Lions fans who have sworn off their former favorite team will be screaming themselves hoarse when Detroit makes it to the promised land.

The accent is just too perfect. Just listen to the way he says “gee, kid, I don’t know. Hit the road,” and “look, I told you before kid, don’t bother me. Now beat it.” Tell me you don’t see Bill Swerski’s Super Fans. Sure, we don’t know much about this guy, but you can bet when he gets off work he’s heading over to the Cubby Bear Lounge to catch a game with hundreds of Chicagoans who sound just like him.

Again, it’s just too perfect. When John Candy and his friends finish their cross-country trek back to Wisconsin, wou know the Polka King of the Midwest will be heading to Lambeau Field for a Week 17 clash against the one of their divisional rivals to celebrate another division title and ring in the New Year. The ‘Kickers and the Packers both had some big hits in the ‘70s, too.

Kevin’s mom knows a thing or two about heartbreak. She presumably spent months helping to plan their trip to France, only to see it all go to Hell in a handbasket when they Kevin. The distraught mother spends the next few days desperately trying to get back home and reunite with her son, only to keep running into roadblocks along the way. What a gut wrenching feeling that must be

What do Vikes fans know about heartbreak? How about four Super Bowl losses in eight years? How about the 1998 NFC Championship Game? Damn! Then there’s the 2009 loss to the Saints in OT and the debacle in Seattle. When will the heartbreak end? Keep dreaming, though, Vikings fans, because… “This is Christmas! The season of perpetual hope!”

Okay, Kevin’s sister isn’t the incompetent one, but she delivers one of the best quotes of the movie. And some days it feels like the kickers in this division fit the bill. Cody Parkey’s “double doink,” Blair Walsh’s missed chip shot in Seattle and more recently, Dan Bailey’s brutal outing are just a couple examples that come to mind. Every now and then Matt Prater has had a few rough days, but he and Mason Crosby are two of the greatest kickers the NFL has ever seen, so we’ll call them exempt for now.

While it’s inconceivable that a family could actually forget a child home alone when leaving for an international vacation, part of the blame can be laid on poor, unsuspecting Mitch Murphy, the McCallisters’ neighbor across the street. He’s only in the movie for a fleeting moment, but after annoying the shuttle driver for a few minutes, he went and rummaged through the family’s bags and was mistaken for Kevin, leading to a royal disaster.

Speaking of brief tenures resulting in a royal disaster, the Lions mistook GM Bob Quinn and head coach Matt Patricia as the right guys to bring the team to the next level. Surprise, surprise — they weren’t the right guys and they’ve been sent packing. “Have a nice trip, bring me back something French!”

You ever heard of the South Bend Shovel Slayer? Ok, the Vikings tight end didn’t murder his family and everyone on the block with a snow shovel, but he did go to Notre Dame. And he’s quite the menace on the field. As it turns out, Old Man Marley didn’t kill his family either, and he’s a big softie. Kinda like Rudolph, who runs a charity in Minneapolis and was nominated for the NFL’s Walter Payton Man of the Year Award last year.

Kevin famously says “I don’t want to sleep with Fuller. If he has something to drink, he’ll wet the bed.” So I’ll just leave this here.